Verde – the colour of your money 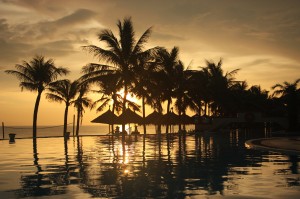 What better place to invest in property than this tropical paradise.

Cape Verde is the ideal location for an investment property.It is located in the central Atlantic ocean 350 miles off the coast of West Africa. Although it is very close to Africa, cool currents keep the temperature moderate.

It has stunningly beautiful scenery, some of the best beaches in the world, and enjoys consistently good sunny weather all year round with temperatures between 25 and 30 degrees centigrade, so there is no “low” season, or rainy or hurricane season.

It is one of the few holiday spots that are actually receiving an increasing number of visitors. According to the National Institute of Statistics of Cape Verde there has been a 115% increase in tourism since 2000. At the same time there are stringent building regulations which protect the island from over development. Buildings are low-rise with a maximum of two floors allowed.

The main airport is on the island of Sal – where the property development is taking place. Indeed 60% of the island’s tourist stay on Sal which has an average occupancy overall of 80%, thereby providing a sustainable source of rental income for property owners. There are flights to and from over 60 major cities around the world.  Direct flights from the UK take just over 5 hours so there is no jetlag.

The culture is creole and is a blend of European and African. The local people have a reputation for being warm and friendly.

Cape Verde has a democratically elected government and social, religious, political and economic stability. Land value is increasing at a rate of 15% per annum so investors can benefit from strong capital growth as well as good rental income.

According to the IMF,

There has been a great deal of foreign investment in Cape Verde, with $240 million dollars from the World Bank to improve infrastructure and utilities, on roads, healthcare, water and energy.

The agreeable climate, location, international investment and natural beauty of the islands make this a world class tourist destination.

There is no doubt that location is a vital aspect of a property.  The purchase of a luxurious hotel  suite in picturesque Cape Verde is the ideal investment property.

Built by an international property developer skilled in constructing buildings of the highest quality, and managed by a resort operator of over 50 years experience who are leaders in their field and attract 4.5 million visitors to their website per month.  All this, along with the appeal of Cape Verde itself greatly increases the probability of year round occupancy – and therefore a good rental income.

The resort is marketed by a large network of tour operators and airlines, and there are flights to Cape Verde from many international airports. Additionally, the government of Cape Verde is investing heavily in the island’s services, utilities and infrastructure.

It is worth noting that an increasing number of tourists are visiting Cape Verde.  With its stunning scenery, enviable all year round climate it is no surprise that more flights are planned for the island. There is also however, legislation in place to restrict the amount of development within the islands so investors are protected against supply being greater than demand.

This is a tried and tested investment vehicle. Another resort has been developed on Cape Verde and has become a successful  tourist destination which meets the needs of holidaymakers and generates regular income for investor clients.

It affords many of the benefits of regular buy-to-let properties such as rental income and capital growth without requiring a mortgage or even a large capital outlay.

Surrounded by natural beauty, year round warm and sunny climate and easy travel links from around the world – this is a superb overseas investment property.

Conservative estimates are of a net yield of 9.4%.  SIPP compliant – enjoy the tax advantages of purchasing through your pension.

The returns on the property investment are relative to the level of occupancy, the income generated by the tour operator and the popularity of Cape Verde as a holiday destination.

There are multiple investment options to choose from to suit all budgets.  Invest in a whole unit OR buy a fraction – anything from a half to a twelfth of a suite.

Investment yields are very attractive and investment levels for fractional ownership start at around £20,000 with whole unit investments from £149,000.

Investors receive 3% interest during the pre-completion phase, so your money is working for you right from the start.

Property can be a direct investment, or purchased through a SIPP (Self Invested Personal Pension) giving considerable tax advantages.